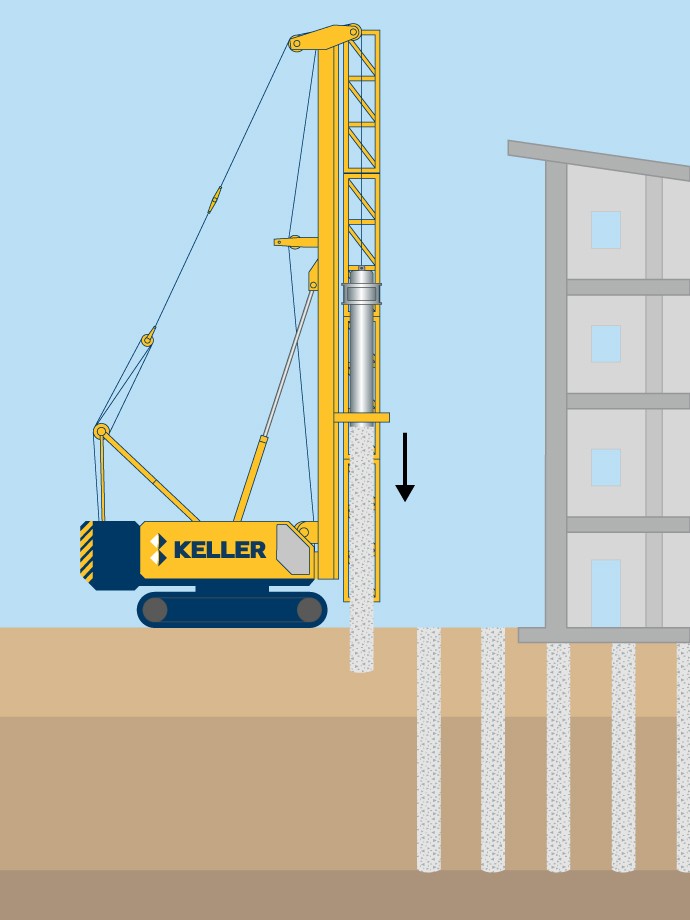 Strip Footing: This is a continuous strip of concrete designed to spread load from uniformly loaded walls to sufficient area of the soil. It supports mainly the load bearing walls and can sustain up to 2-storey building. The width of the strip is usually about 450mm. The thickness of the foundation depends on the strength of the foundation materials but must not be less than the projection of the foundation and in no case less than 150mm. There are classes under strip foundation that includes ordinary strip, wide strip, deep strip etc.

This type of footing is used in places where the bearing capacity of the ground is low such as in marshy areas or soft clay, silt or made up ground. The wideness of the strip is to reduce pressure on the poor soil arising from the load by spreading the load over wide area of the soil. Since H ˂ B as usually the case, transverse rebars are provided to withstand tensile forces that arise therefrom.

Note for strip footing: On slopy sites, it is an economical procedure to use stepped foundation. This helps to reduce the amount of excavation and backfill. The stepping is done to follow the line of ground surface and the depth of each step is usually 225mm. The lap of concrete at the step must not be less than the depth of the footing.

This class of strip footing is used in shrinkable clay soil to counteract variable soil conditions at different seasons. The depth of this footing is usually 900mm or more. Usually, the deeper the foundation thickness, the greater the resistance to fracture from unequal settlement.

This is an isolated foundation to support columns. The load of the structure is transmitted through the individual columns and the area of the foundation is determined by dividing the column load (P) plus the weight of the foundation (W) by the allowable bearing pressure (qa). That is, A = (P + W)/qa. The minimum footing thickness is 150mm.

This consist of 2 or 3 columns sharing the same footing. Combined footings are used only when there is need for them and the conditions where they are used are:

Combined footing can be formed of any shape as far as the basic requirements are satisfied. Rectangular, trapezoidal and T-shape are usually common.

This type is suited for use on soil of low bearing capacity such as soft clay or silt and foundation of multi-storey framed buildings. If in such areas, the total area of the individual footings or strip required cover more than 50% of the projected area of the building, it is no longer economical to use single pad footing. Raft foundation should be used instead. It is common to form a raft foundation for the whole building rather than separate strip or pad footing for columns. Rafts act as a single entity thus avoiding relative settlement between the foundation of columns. The thickness of raft foundation is usually based on the design but values of 300mm are common.

Raft foundation is used in structures when

There are many types of raft foundation. To know the suitable one to use, it is necessary to confirm that

With this knowledge, the following types of raft applies:

(a) represents a true raft which is a flat concrete slab of uniform thickness throughout the entire area; this is suitable for closely spaced columns, carrying small loads.

(b) represents a raft with a portion of the slab under the thickened column; this provides sufficient strength for relatively large column loads.

(c) is a raft with thickened bands provided along column lines in both directions; this provides sufficient strength, when the column spacing is large and column loads unequal.

(d) represents a raft in which pedestals are provided under each column; this alternative serves the same purpose as (b).

(f) represents a raft wherein basement walls have been used as ribs or deep beams.

Considerations in the structural design of raft foundations

The simplest form of raft foundation consists of reinforced concrete slab that supports the columns and walls of a structure and distributes the loads to the underlying soil.

The slab is designed as a column flat-slab floor supported without upmost deflection at the columns and walls. The soil pressure acting against the slab is commonly assumed to be uniformly distributed and equal to the total of all column loads, divided by the area of the raft. The moments and shears in the slabs are determined by the use of appropriate coefficients listed in the codes for the design of flat-slab floor.

On account of erratic variations in compressibility of almost every soil deposit, there are likely to be correspondingly erratic deviations of the soil pressure from the average value. Since the moments and shears are determined on the basis of the average pressure, it is considered good practice to provide the slab more reinforcement than the theoretical requirement and to use the same percentage of steel at top and bottom

Also, even if deep-seated or systematic settlements are negligible, the flat-slab analogy is likely to lead to uneconomical design unless the columns are more or less equally spaced and equally loaded. Otherwise, differential settlements may lead to substantial redistribution of moments in the slab. Under such circumstances, rafts are sometimes designed on the basis of the concept of the modulus of subgrade reaction, which implies that soil is considered to be analogous to a bed of closely and equally spaced elastic springs of equal stiffness in its stress-strain behaviour.

Raft foundations are invariably constructed of reinforced concrete. They are poured in small areas such as 10 m × 10 m to avoid excessive shrinkage cracks. Construction joints are carefully located at places of low shear stress—such as the centre lines between columns. Reinforcements should be continuous across points. If a bar is spliced, adequate lap is provided. Shear keys may be provided along joints so that the shear stress across the joint is safely transmitted. If necessary, the raft may be thickened to provide sufficient strength at the joints.

This is used where the formation is bad but there exists a firm stable soil a little below the surface of the formation level. The bored piles carry the load through the soft soil or fill material to the firm strata. It is useful in expansive soil (soils that swells or shrinks such as montmorillonite or black cotton soils).

Drainage of backfill in earth retaining structures such as bridges/flyovers