How to eliminate joints in concrete slab 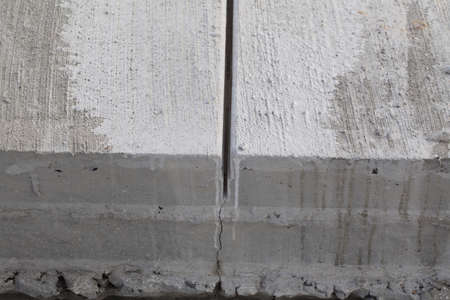 Three types of joints are common in large sections of concrete. The purpose of joints is for crack control. However, every joint in concrete is a weakness. These joints are:

Isolation joint that allow differential movement in all directions.

Construction joints that allow no movement in the completed floor.

Also find HERE how to install some of these joints.

As state earlier, joints are used to control cracks. What then causes cracks?

We know that the process by which cement hardens is called hydration. In large sections, the heat of hydration which does not dissipate quickly causes the increase in temperature of the concrete. As the surface of the concrete is subjected to prevailing or ambient temperature, they cool off easily, thus creating a thermal gradient across the section of concrete. When this temperature difference between the cooled surface and hot internal exceeds 35oF, cracking occurs first in the surface and gradually progresses to the interior.

Every joint is a weakness but the consequences of not providing joints is also very costly. It is possible to eliminate joints in concrete but it is a tedious process. In some sections such as raft foundations, it is often necessary to eliminate joints. Raft foundations are large sections. How can such large mass of concrete be cast without joints?

Previously, cracking of large mass of concrete is prevented by minimizing the cement content by:

The technique of elimination of joints especially in casting mat/raft foundations is by controlling the temperature difference, thus limiting internal thermal strains and avoiding externally applied restraints. Internal thermal strains are controlled by ensuring that no part of the hydrating concrete mass is allowed to become cooler than the hottest part by more than 35oF.

This determination of the maximum temperature has been found usable for all practical purposes between 300 and 600kg per cubic meter cement content mixes and for any sections with all dimensions greater than 150mm. In addition to controlling temperature gradient to minimize cracking, it is important to avoid casting the fresh concrete against adjacent sides or between two opposite massive sections of hardened concrete while the reinforcement is continuous across each interface. The thermal expansion of the fresh concrete and subsequent inevitable cooling with its accompanying contraction cause tension cracks to form completely through the concrete irrespective of the thickness.

To effectively use the ‘no-joint’ technique, it is necessary to monitor the critical temperature differences within the in-situ concrete between the hottest and coolest points in the mass from the moment it is cast till number of days. It may be necessary to measure more than two (2) places to guard against missing the extreme differences and this is done by using thermocouples placed at about 25mm from the most exposed surface and at the middle of the cast.

When the gradient begins to increase and approaches 30oF, it is necessary at once to protect the exposed surfaces from further cooling by using either of insulating boards, insulation blankets, tenting or sand over and under polyethylene sheets.